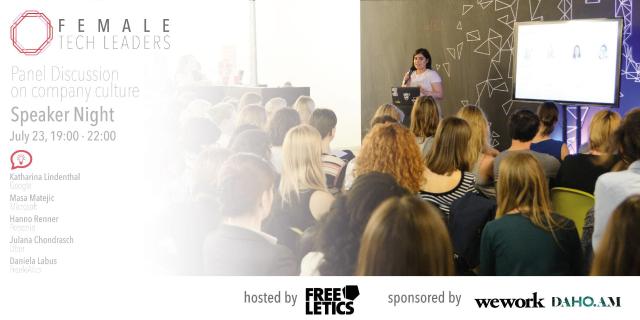 We invite everyone to join the first Female Tech Leaders podium discussion ever! We partnered up together with WeWork and Freeletics to create this satellite event for the Daho.am Tech Conference

For our upcoming Speaker Night in July 23rd at Freeletics, we have come up with something very special for you: Instead of the usual talks, there will be a panel discussion on the overarching theme of company culture. The whole thing takes place at the Freeletics office in Munich.

We think we all agree on the importance of a good company culture as an essential foundation for a successful one. Searching the web about it results into many different opinions and views on this topic. Those differences already start with the definition of Company Culture.

The goal of our next Speaker Night is to clarify, what Company Culture is but more importantly figure out how different companies implement culture into their daily business.
We will discuss which qualities result in a good Company Culture and also why. Another important question to debate will be how does each company ensure the proper enforcement of their ideals on culture.

As part of the panel discussion, five exciting personalities represent their employers and the respective work culture. We are very happy to welcome Masa Matejic (Microsoft), Hanno Renner (Personio), Julana Chondrasch (Uber), Katharina Lindenthal (Google) and Daniela Labus (Freeletics) as speakers. In a lively exchange, we will get to know their view on work environment, company mission, value and ethics, then there will be time to pester your questions. You will also have the possibility to get in touch with each other while enjoying food and drinks.

We look forward to welcoming you at the Freeletics offices!

Who are our Speakers?

Katharina Lindenthal (Developer Relations Program Manager, Google
Katharina is part of the Developer Relations Team at Google. Since she joined Google in 2014, she is responsible for the developer outreach in the German-speaking countries. Katha concentrates on working closely with external developer communities, such as Google Developer Groups and Women Techmakers and also includes supporting startups or mobile agencies. In her spare time, Katha loves to explore other countries (current count: 43), one highlight was traveling through Europe as part of a charity rallye.

Masa Matejic (Modern Workplace Lead, Customer Success, Microsoft Germany)
Masa is Modern Workplace Lead, Customer Success at Microsoft Germany. In this role, she reports to the German Management Board. Together with her team, she is responsible for supporting German Enterprise customers on their way to a Modern Workplace. Not only in regards of deploying technology, but also in terms of adaptation, and change management. She has been with Microsoft since 2013 and was team leader for Business Applications prior to her current role. Before joining Microsoft, she was marketing manager in a start-up and a consultant in one of Europe's largest brand strategy agencies, Scholz & Friends.
Masa acts as a strong advocate for greater inclusion and, in particular, equal opportunities for women and men at work. Amongst others, she heads the Women@Microsoft network in Germany.

Hanno Renner (Co-Founder & CEO, Personio)
Hanno is Co-Founder and CEO of Personio, a startup providing a holistic HR and recruiting software for small and medium sized businesses. Together with his team of currently 100 employees (and growing) Hanno is aiming at digitizing HR processes, so HR departments can focus on the really important factors within organizations - the people! From the beginning on his personal goal was to build a company culture, in which every employee can thrive and have direct impact on the success of the company.

Juliana Chrondrasch (Marketing Manager Germany, Uber)
Julana joined Uber over 4 years ago. Since than she launched several cities in Germany, helped launch the uberNIGHT product in Tel Aviv, partnered with numerous brands, executed and shaped Uber's overall marketing strategy in Germany and so on. Before Uber, Julana worked in Marketing and Communications in diverse Start Ups, rannging from mobile to online and co-founded a fashion app connecting offline fashion stores to customers who are looking for inspiration on their mobile phones. Julana feels most comfortable in the tech environment where she can contribute with her consumer focussed marketing expertise.

Daniela Labus (Director People Operations at Freeletics)
Daniela has years of experience in HR at different companies and therefore has a lot to say on company culture. After getting her Masters Degree in Strategic HR Management in Europe, she started off at Siemens, gained more experience at Holiday Check and is now the Director People Operations at Freeletics
She is passionate about tech-companies, startups, entrepreneur community, agile HR, design thinking, digital transformation, disruption, reinventing organizations!

Who is hosting and collaborating with us?

WeWork:
"WeWork provides more than 253,000 members around the world with space, community, and services through both physical and digital offerings. WeWork is redefining success as measured by personal fulfillment, not just the bottom line. There has been a macro shift toward a new way of work - one focussed on a movement towards meaning. WeWork is accelerating that movement. This summer WeWork is opening in Munich."

Freeletics:
In 2013, a small German startup began disrupting the fitness industry. A multi-billion dollar industry which, until then, had been dominated by stationary gyms and exclusive personal trainers. Within a few years, this bootstrapped company became the creator of some of the world’s most popular fitness apps. Now with 130 employees, 25 million users, 4 apps and a clothing line, Freeletics is one of the fastest-growing sports and lifestyle companies in the world. Since day one, Freeletics has been driven by the vision of helping everyone to become the best version of themselves, both physically and mentally. They strongly believe that every individual in the world, no matter their background, situation or genetics, has the potential to become the best they can be – and we will help them on that journey. Thus, the founders created a concept to allow all people to train their physical strength and willpower without hurdles such as money, equipment, schedules or experience. To train “free” of limits. And so Freeletics was born.